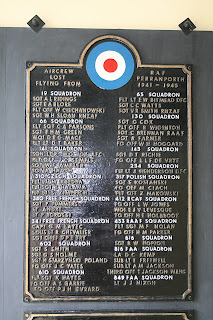 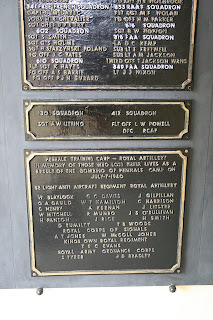 William Moffatt survived the bombings of Penhale Camp in which 22 men were killed
"A lone German bomber, who we believe was looking for RAF St Eval, stumbled across Penhale Camp and dropped its four bombs.
"Twenty-two soldiers were killed and a number of others were seriously injured."
William Moffatt, who survived the bombings, said: "One of my colleagues, said that 'plane is pretty close', and as he said that 'bang, bang, bang' and that was it.
"We all dived out to see what damage had been done, or if any of the lads had been killed, and they had.
"The following weeks we all slept out on the beach and on the sand dunes because everybody got scared stiff."
Bob Andrew, from the Cornish Aviation Society, who was 10 at the time of the bombing, said: "We didn't know what had been done and we were rather taken a-back that somewhere had been bombed.
"He [Mr Andrew's father] was terribly upset and knew soldiers had been killed, and he went to the church and saw these coffins, he came back with tears streaming from his eyes saying 'those poor boys, they're all dead and in one grave'."
Most of the 22 men who were killed in the incident were buried in Perranporth, but many of their families were unable to attend their funerals because they were based in Scotland, Wales and the north of England.
Posted by Jol Martyn-Clark at 07:33