I visited Calverley almost by accident on the way back from Shipley. The memorial is situated in Victoria Park, a fine stretch of open park land. A great place. I can only belive that the name plates are new. There is very little staining coming from them. I actually quite like the green staining from the bronze. I can see why many would not.
These are the pictures. The memorial is No 21869 at the National Archive of War Memorials.

In the churchyard at St Cuthbert's in Lytham there are both memorials and also gravestones. The photos are below. Somewhat disappointing that the graves have the little Remembrance Day crosses and the memorials do not. Perhaps the memorials are not so obvious. But its nice that people remember anyway. Hopefully I can derive links from some of them. Some will cross reference onto the main memorial in Lytham at Hastings Place and at St Cuthbert's.

Below are the familiar white gravestones:


As before I appear to have missed several servicemen's graves. Any of the links will take you back to St Cuthbert's graveyard. There you will find the missing graves. There is more information on many of the CWGC website. The memorials will also take you back to the CWGC website too. I have not done any searching anywhere else.
Posted by Jol Martyn-Clark at 14:37 3 comments:

St Cuthberts Church -link to the Birley memorial in Kirkham

If you visited before I have decided to put the servicemen's graves at St Cuthbert's separately. However this set of pictures are related to Kirkham and Wrea Green - the Birley family. This link goes back to the Birley memorial in the Kirkham Parish church graveyard. It considerably helped in "decoding" the information on the Birley memorial. Hopefully it helps in nailing some of the links that Birley researchers needed to establish.

Not often I consider a page closed but unless someone can come up with more information to add...
Posted by Jol Martyn-Clark at 15:01 1 comment:

I think it is now the Manchester Metropolitan School of Art. Part of the University. I had the opportunity to accompany a group of students to see the degree exhibition - they were extremely impressed as I was. However I did manage to take many photographs - the memorial was the most important item. I did photograph the plaques too - Have to go on the appropriate page but here is the memorial - together with the location shot.

* Nurse A. M. MYLCHREEST. Nurse Alice Mona Mylchreest, Quartermaster Basford. House Red Cross Hospital (Manchester), and Commandant of the 82nd Detachment East Lancashire Red Cross, died whilst on a visit to Peel, on 1st September, 1918. She was the elder daughter of Mr. and Mrs. Thomas Mylchreest, 1 Daisy Bank, Old Trafford, Manchester, and was 30 years of age. After leaving boarding school, she attended the Manchester School of Art, and had the honour of executing a page of the Illuminated Address which was presented by the Manchester Corporation to H.M. King George on his visit to that city. Nurse Mylchreest commenced her services with the Red Cross Society in September, 1914. From the IOM Examiner 1918

The other plaques in the building refer to openings and centenaries and will be posted elsewhere but linked.

Lots of further research and a datapage to follow - but the names are more important.;
Posted by Jol Martyn-Clark at 14:21 2 comments:

This war memorial is not in the town centre, it is set inside fairly large grounds which give it a sort of amphitheatre feel to it. About 400 yards from the Parish Church along a fenced with farmland on one side of the walkway. Grassed and gardens on the other. There are terraces above which lead out to Kirkham's main street. The walkway continues to more houses. The photographs make a better description. I haven’t completed the transcription - for WW2 (tomorrow!)

(*the stars behind the names are brothers) 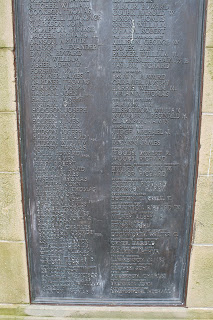 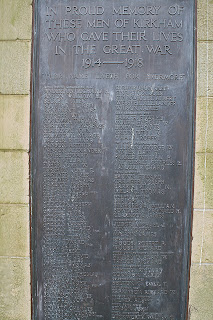 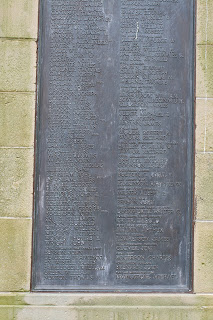