Appleby Bridge is a small village in West Lancashire. It possessed quite extensive industry years ago, but it has descended into quite a laid back "nothing seems to happen" sort of place, however...

I visited Appley Bridge one Saturday morning during the Beacon Bash as a competitor on the notoriously muddy run in Lancashire. The weather was cold damp and chilly. The snow had not long since disappeared. I padded down the road the first thing I saw was a diving bell! Bit unnerving I thought. Expecting a flood? Actually Appley Bridge had been flooded about 30 years ago('87) Council press release says :

''"When severe flooding occurred in several parts of the district on Saturday 22nd August 1987 - Parbold and parts of Skelmersdale were badly affected, whilst the Millbank estate in Appley Bridge was flooded out, with several houses being filled by water to first floor level and almost all of the remainder having water in their ground floor, varying from about two feet to five or six feet in depth. An amateur meteorologist with a weather station at Hilldale recorded the fall of 3.8 inches (97 mm) of rain during the 48 hours beginning at 8.00am on Saturday, 22nd August: over two thirds of that rainfall - about 2.6 inches - being in a four hour period on Saturday afternoon..."


"...From preliminary information, it would appear that the storm frequency was in the order of 1 in 75 year occurrence and this led to widespread flooding throughout the region..."

On the way down I spotted an interesting road sign - and photographed "Skull House Lane" Had to research... This is what Wikipedia turned up.


"In between Appley Lane North and Miles Lane is a road called Skull House Lane. The lane takes its name from a cottage known as Skull House, which is located about halfway down Appley Lane North.
The story goes that in the time of the war between the Roundheads and the Cavaliers, Oliver Cromwell ordered that the monks of England should be driven out of their monasteries and killed, with their monasteries then razed to the ground. One canny monk fled from his monastery and took refuge in a large cottage in Appley Bridge. To try to avoid discovery by Cromwell's Roundheads, the monk hid in a small cubby-hole halfway up the house's chimney. He hid there for some time, until the Roundheads eventually discovered him, and tried to drive him out. They lit a blaze in the fireplace, and the searing heat and thick smoke eventually forced the monk out, whence he was killed. Ever since then, the monk's discoloured skull has remained on the mantelpiece of the house, in the living room.
The inhabitants of Appley Bridge tell that, throughout the history of the house, there have been many residents who have tried to get rid of the skull, and all have experienced disastrous results from doing so. According to legend, one threw it into the River Douglas at the bottom of Appley Lane North. Shortly after, the skull returned to the house and the offending resident drowned in the river. Another tried to get it as far away from the house as possible, and shortly after, the skull returned once again and this time, the house's inhabitant fell down the stairs and severely injured himself. Others have tried many ways to banish the skull, and all have met with misfortune or fatality—sickness, the death of a loved one, bad luck ... the list goes on and on. The house's current residents have, unsurprisingly, never tried to remove the skull."
Seems to be some interesting parallels with the Affetside Skull there!
But that's not all. Meteorites - Surely not... Wikipedia tells me this:

"At around 8.45 on Tuesday evening of 13 October 1914, the inhabitants of Appley Bridge (indeed Lancashire and Cheshire too) were treated to a sudden and spectacular illumination of the night sky, caused by a meteorite that was subsequently found in a farmer's field in the village the following day. Found just 18 inches below the surface of the field, with the appearance of burnt iron the small rock weighed almost 33lb (15 kg). An article in the "Scientific News" (No. 2588, 30 October 1914) stated 'a small fragment which had been detached from the larger mass was put on view in a shop-window at Appley Bridge.' " 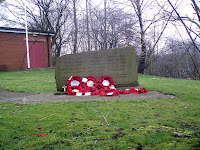 However the purpose of the visit was to get a tea and be on my way losing as little time as possible. Shot out of the checkpoint and just 20 to 30 yards away was a memorial stone in the corner of the grounds. Unfortunately the bottom inscription of the stone refering to the second World War was covered with wreaths, I was on my way, and too cold and wet to venture back and move them. But this is the inscription that I photographed.
1914     LEST WE FORGET     1918
BARRETT FRANK    FOSTER JAMES  PARKINSON HENRY
BAXENDALE RALPH     GRAY JOHN    PORTER JOHN HENRY
BLUNDELL JAMES     HALTON WILLIAM     TOMLINSON JOSEPH
EASTWOOD REGINALD GEORGE     HODGES FREDERICK     WILCOCK THOMAS
FITZPATRIC THOMAS     HURST WALTER WITTER HAROLD
1939 -1945
H BOND JV RANDALL FA DRAKE.
The rest of the names are covered up.
Its wonderful to see the respects being paid.
However back to the event, completed, and quite enjoyed it. Back again next year, photograph the bottom of the memorial and a couple of other shots too.
Perhaps I will check my life insurance. Perhaps this town is not so sleepy after all!
(All photos are by lazylikesunday, except the meteorite one - Thanks to wikipedia - I want to provide original material, but in this case they provided excellent copy)
The pictures underneath refer to the bridges. I think there are two or three. However the road crosses the Railway, the Canal and the River Douglas. That must be quite unusual. My route took me along the river. You can see some wet and perplexed competitors on the side, ahead of me...

The information on the bridge states: