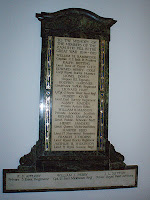 The Royal Academy of Music Memorials

I had the opportunity to visit the Royal Academy of Music at the end of 2010. It was a thoroughly enjoyable visit. The impression that the Academy gave out was one of the utmost excellence and the quality of musicianship was of the highest order. To obtain a place at the Academy and Graduate places you amongst the finest. However I did not expect to find the memorials in the entrance hall. I expect many students have seen and acknowledged their presence, few will know the names. I feel that members of the general public will not know of their existence. They are however reproduced below. They are copy-write free, but I would love an acknowledgement if you download them. If you use the on a website a link would be superb. I have a higher resolution image should you need it. They will probably not email, being too big. There were two faintly bemused security/janitors as I photographed the memorials.


Simmon Latutin has a separate plaque too.  There is a biography of Simmon here. The other plaque mentions the refurbishment that was done in 1995.
Posted by Jol Martyn-Clark at 16:57