One mile north of Millfield school and about a quarter of a mile before you get to Thornton windmill on the Fleetwood road at Four Lane Ends lies the war memorial in Thornton.The roads go to Cleveleys proper on the sea front, Thornton inland. Poulton/Blackpool and Fleetwood. There was a National Westminster bank on one of the corners, a library/theatre on the opposite side. It is a busy road! As you can see the memorial gardens are very well kept and although traffic literally pours round it - seems very quiet, maybe the trees help. The memorial was officially unveiled by Colonel Sir Hugh  Jeudwine on the 11th of November 1923 - the fifth anniversary of the Armistice. There is a link here for supplementary information.


The memorial is almost in two halves. There is a slab to the right of the picture that has been placed by ICI, relating to the fallen employees of the plant for both World Wars. This slab was moved here at the closure and demolition of the Burn Naze plant.

The central memorial relates to the fallen from the Great War and the three open books commemorate the fallen from World War 2. It is indeed a heavy toll for what would have been a small village, it still is. I suspect some of the names on the ICI memorial will match the main memorial and possibly the open books too.

The names on the memorial have been added to the Datastore here.

Here is a link to the Millfield School Roll of Honour. They also have some of the same names.

This is quite a large memorial. Approx. 6 feet in length. There does seem to some wear on it. The letters are clearly discernible but the debris from the trees does cover it. Really glad that ICI or whoever decided to move it from the Burn Haze works before it was flattened.
Here are the pictures of the ICI memorial:


These are the pictures of the main memorial: 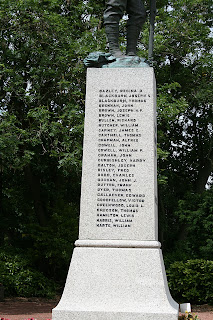 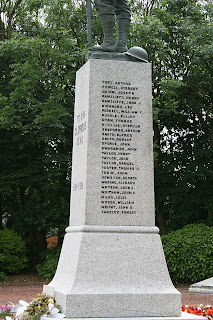 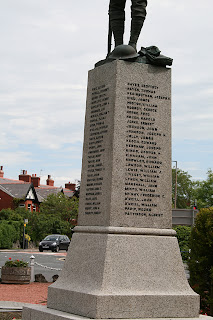 These are the pictures of the open books surrounding the main memorial: 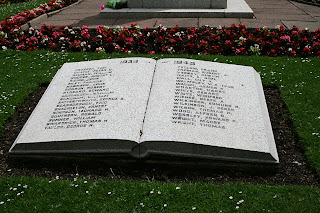 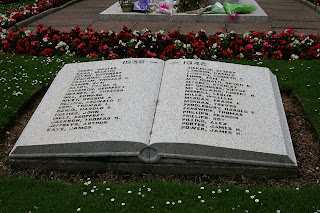 I have to admit that the actual books "work" very well. There must have been the temptation to add them to the main memorial.
Posted by Jol Martyn-Clark at 14:46