Whalley - By the old Grammar School


Whalley - part of the Pilgrims way. allegedly this was a destination from Pilgrims Cross. Possibly a central point of commerce. Packways certainly came this way.

I will return, the light was failing and I knew where the memorial was.

However a tasteful location well looked after and certainly a good place for contemplation... even if traffic is quite heavy. Fortunately the A59 will take traffic away. 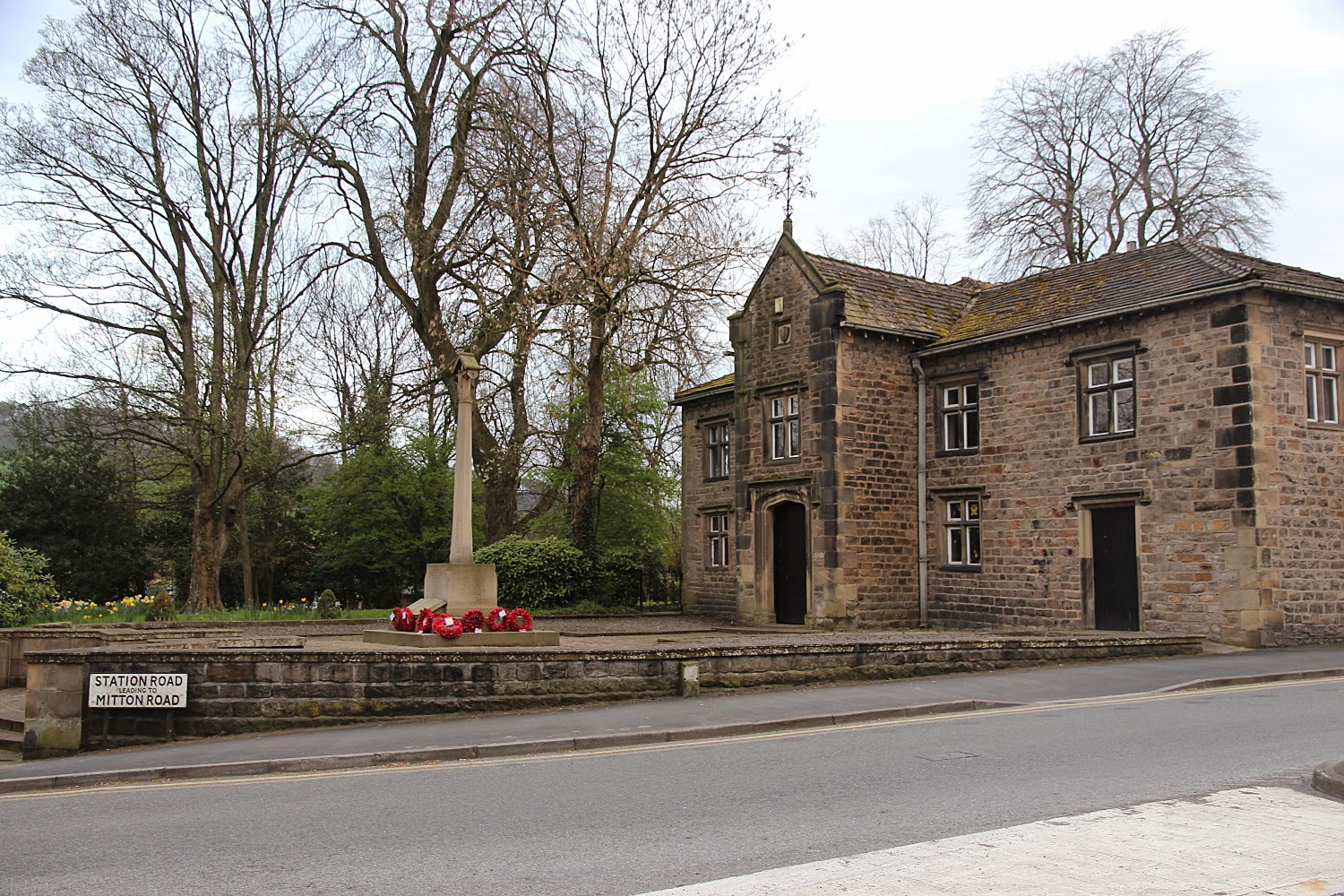 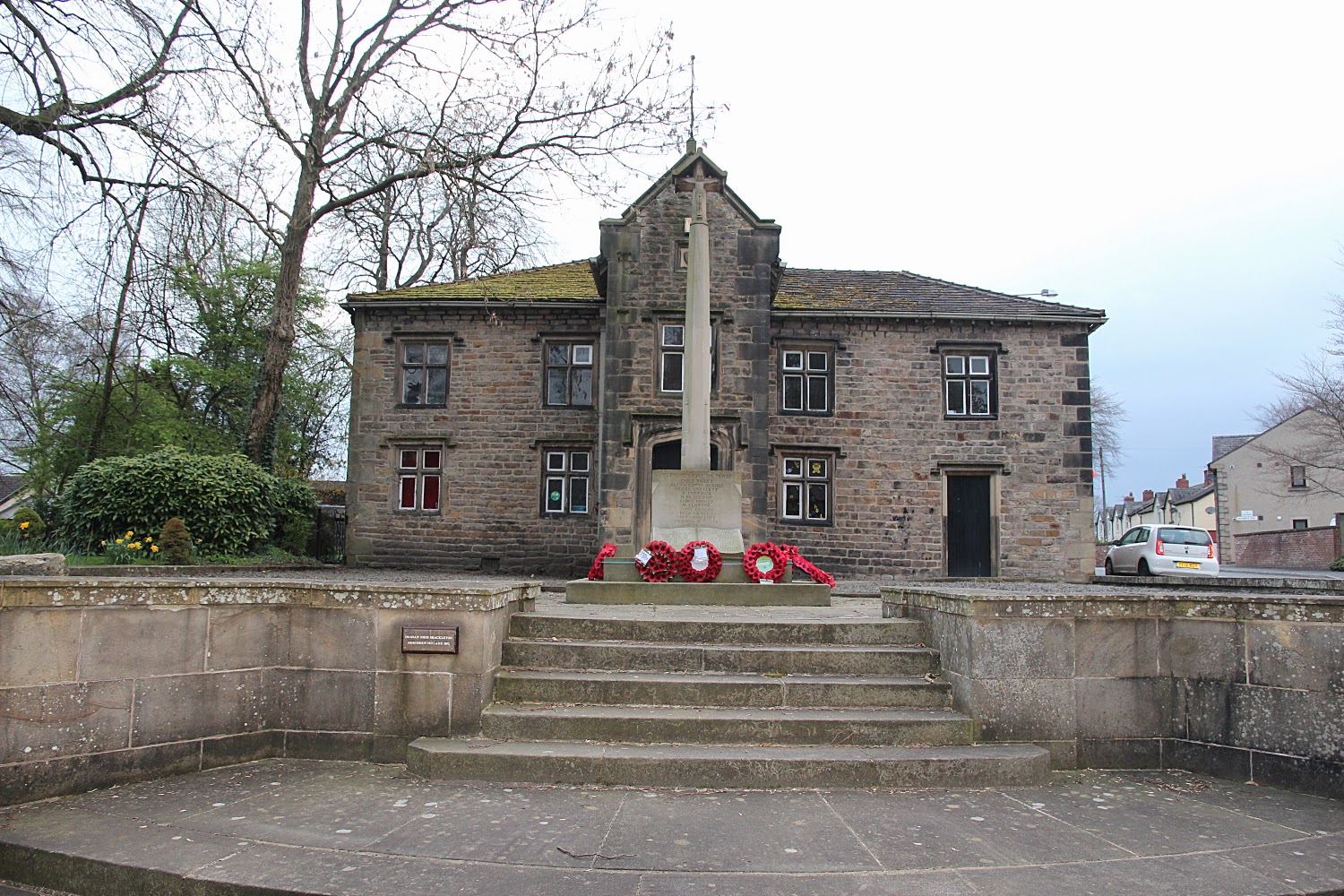 TO THE MEMORY OF THE MEN OF WHALLEY
WHO LAID DOWN THEIR LIVES
FOR KING AND COUNTRY IN THE GREAT WAR
1914 - 1918
(This inscription is around the top of the plinth)
Chris Bailey
Chris Bailey
Allan Edwin Barnes
Moses Bartlett
R Bentham
H. Brayshaw
Chris Chiney
W. Clutton
John Craggs
Fred Craven
Bert Crowther
Francis E. Davies
R.Dean 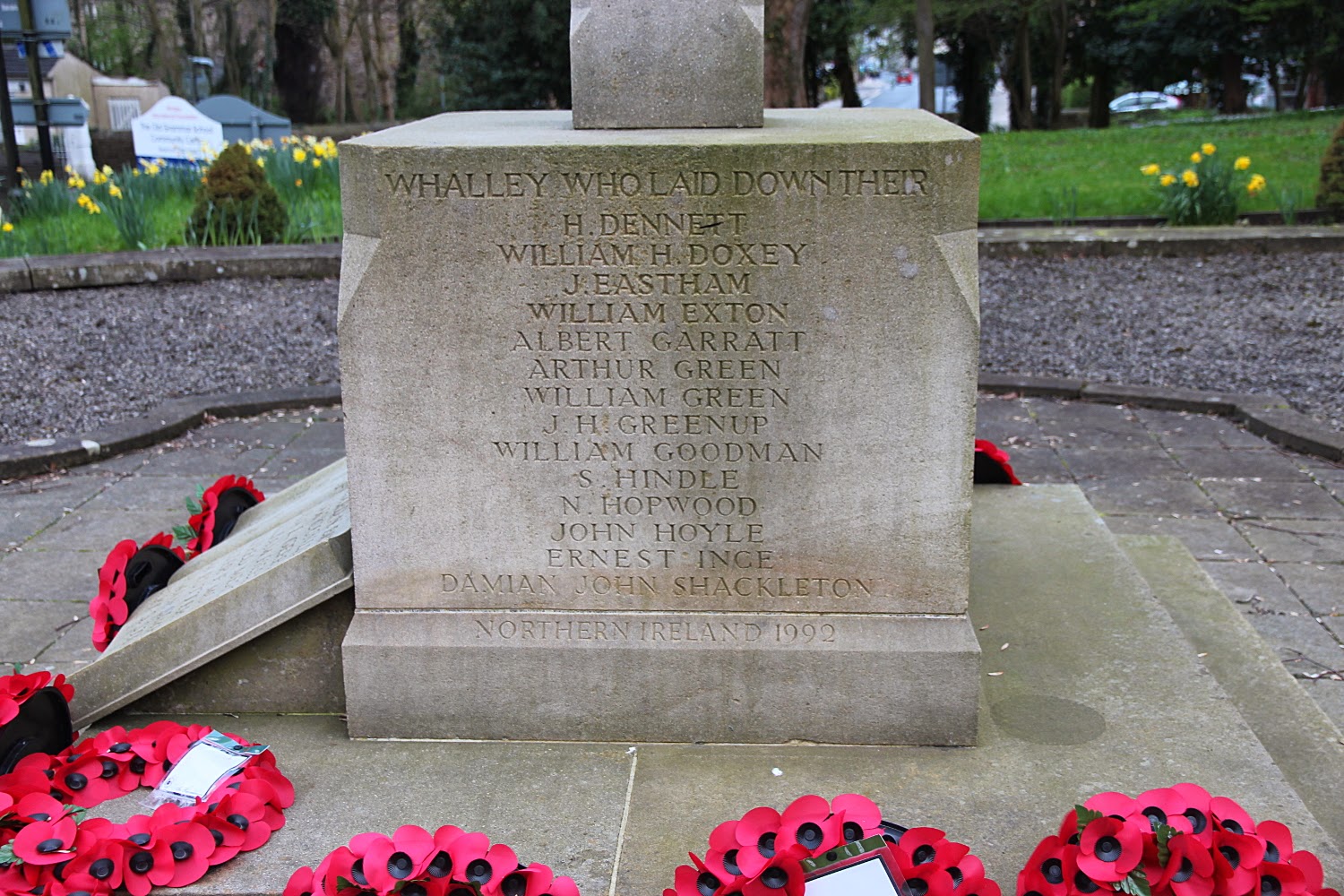 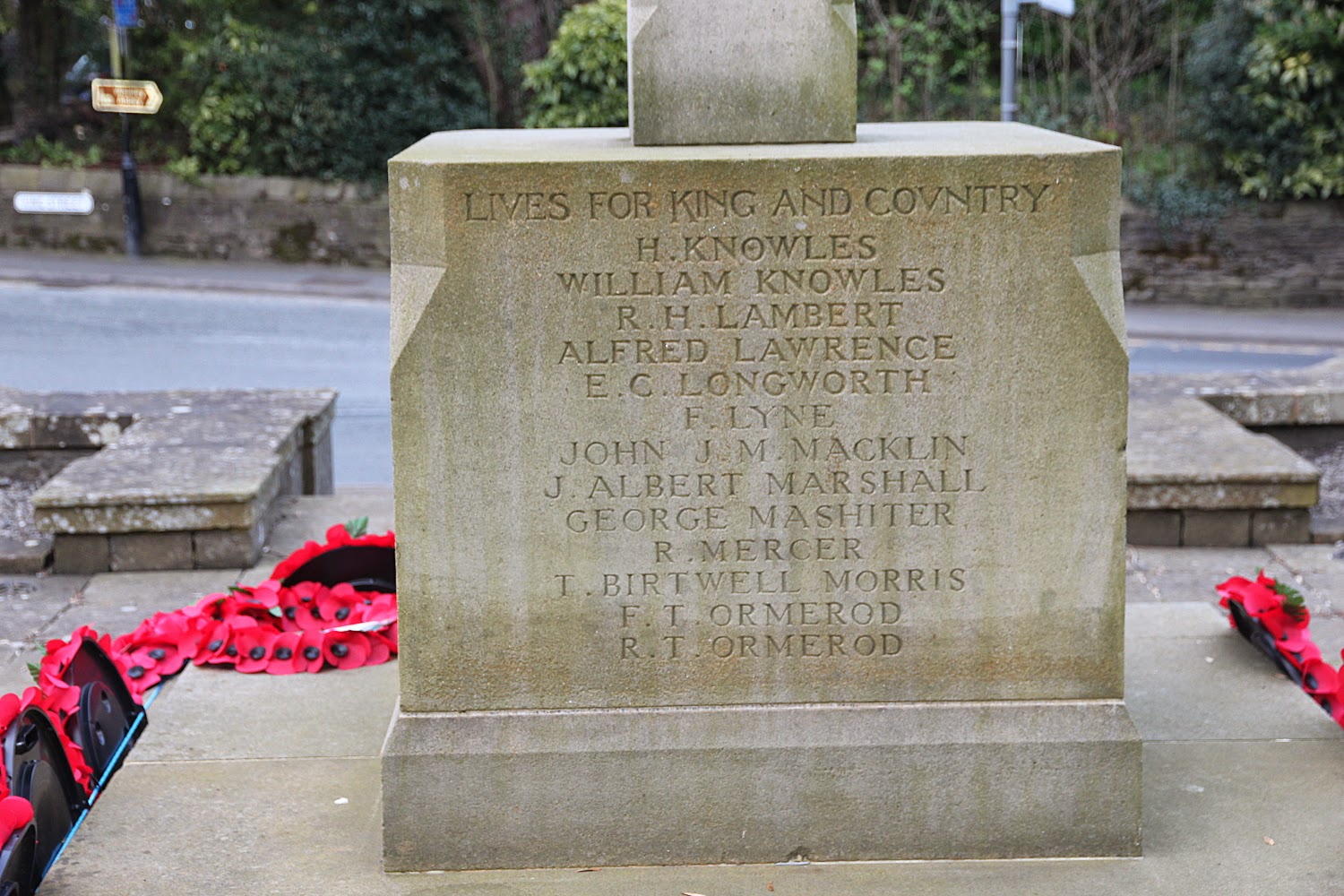 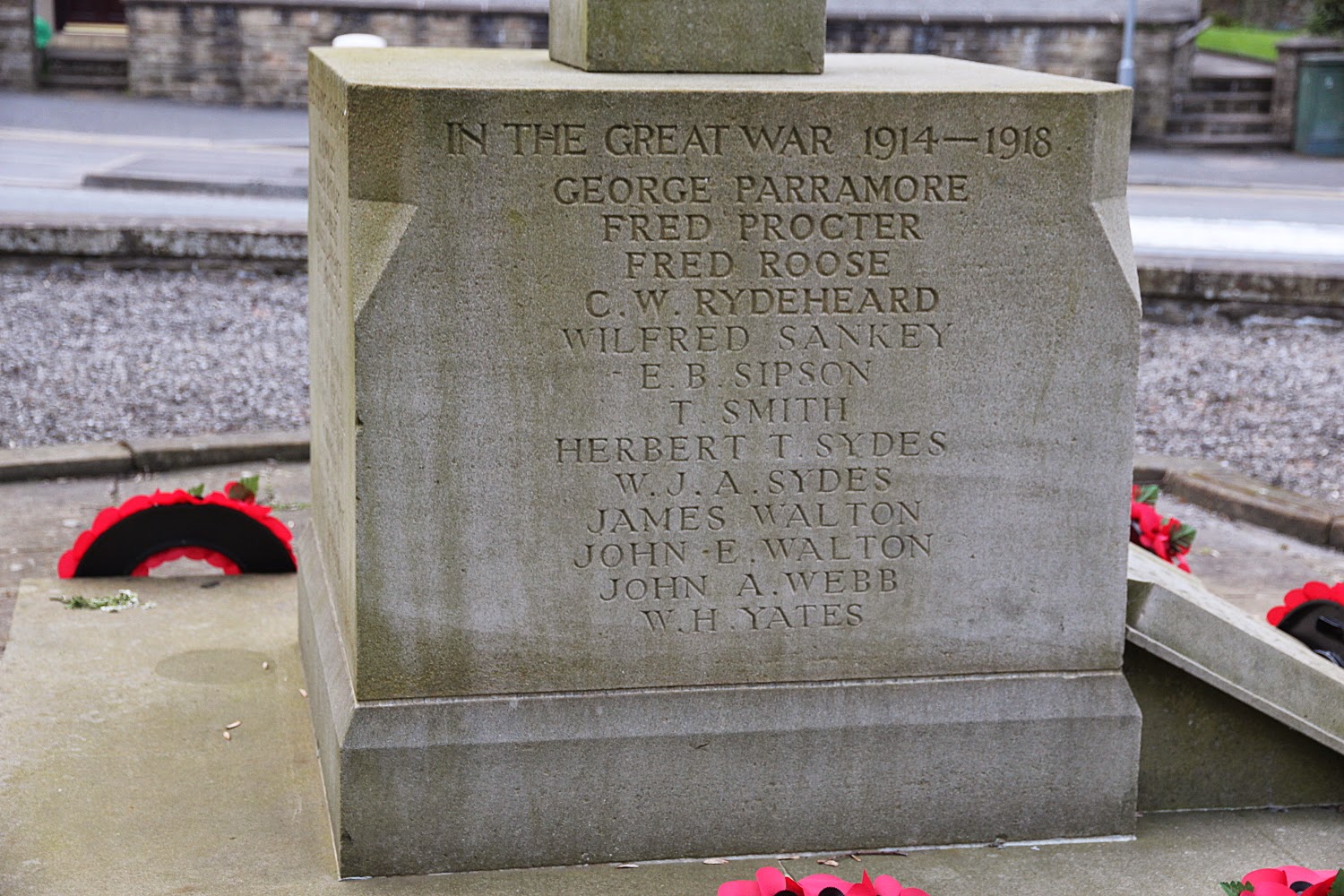 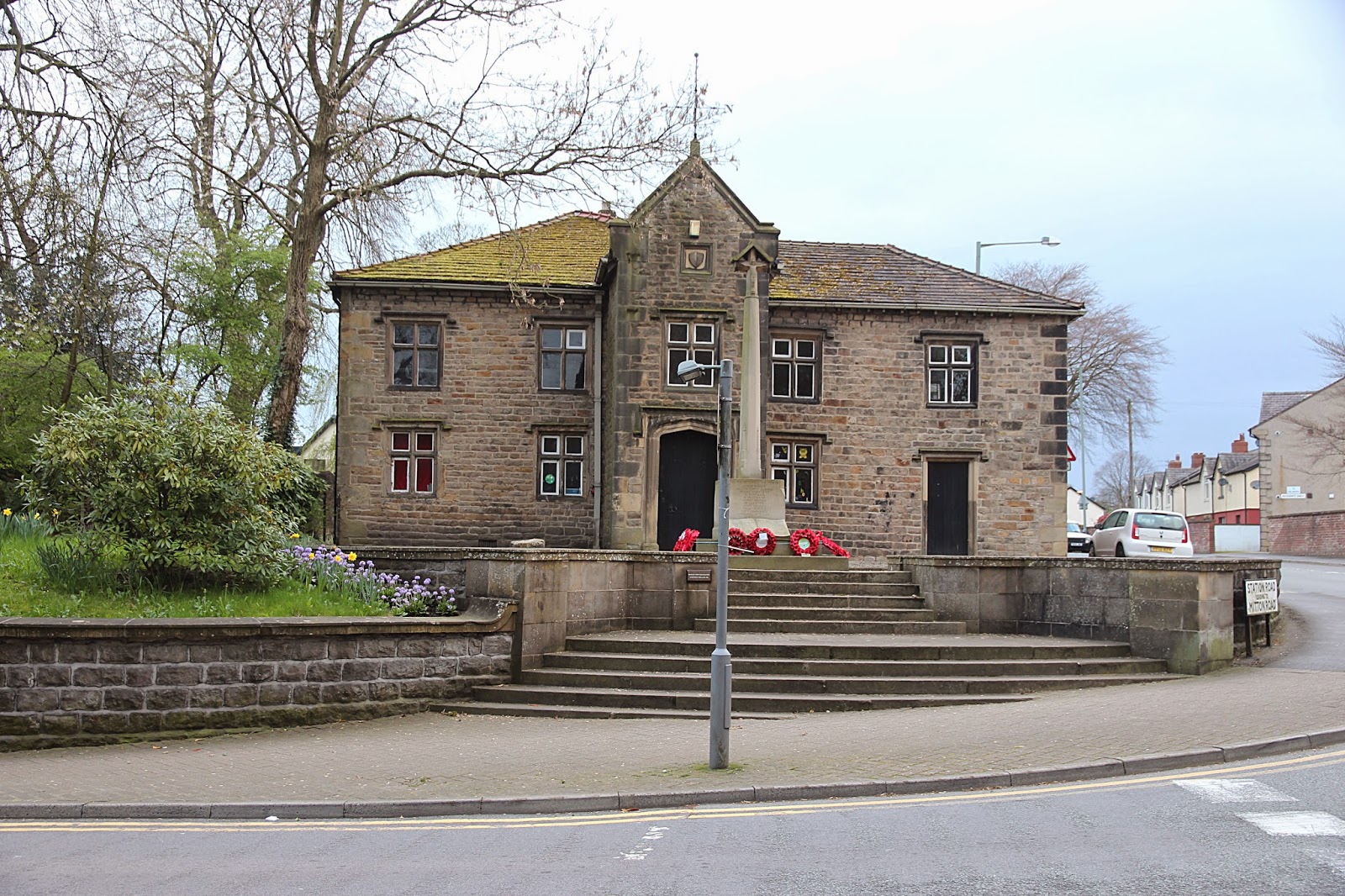 This memorial is also recorded at the East Lancs Memorials website
3It was unveiled on 3rd September 1921, unveiled by Major General H. Shoubridge

Situated about halfway between Preston and Bolton, Belmont nestles in the lee of Winter Hill. In my motorbike days, we used to ride out to Belmont - there was a crackin' café there. Not as busy now the motorway takes care of some of the traffic. It was the quickest but not the shortest between Blackpool and Bury, and is still the road of choice. It wasn't until I used the Rivington Pike road a while ago that I realised there was a memorial there. 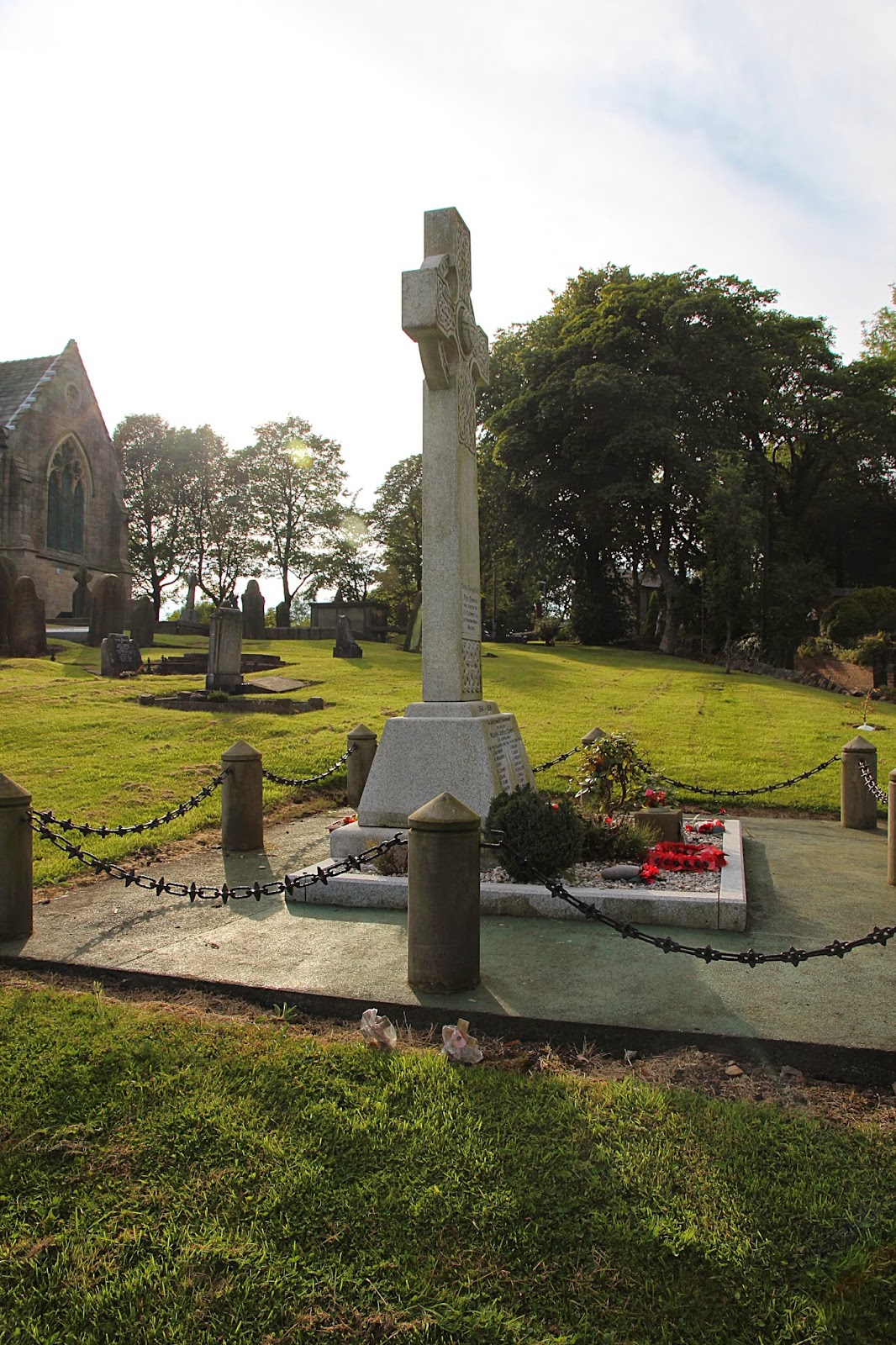 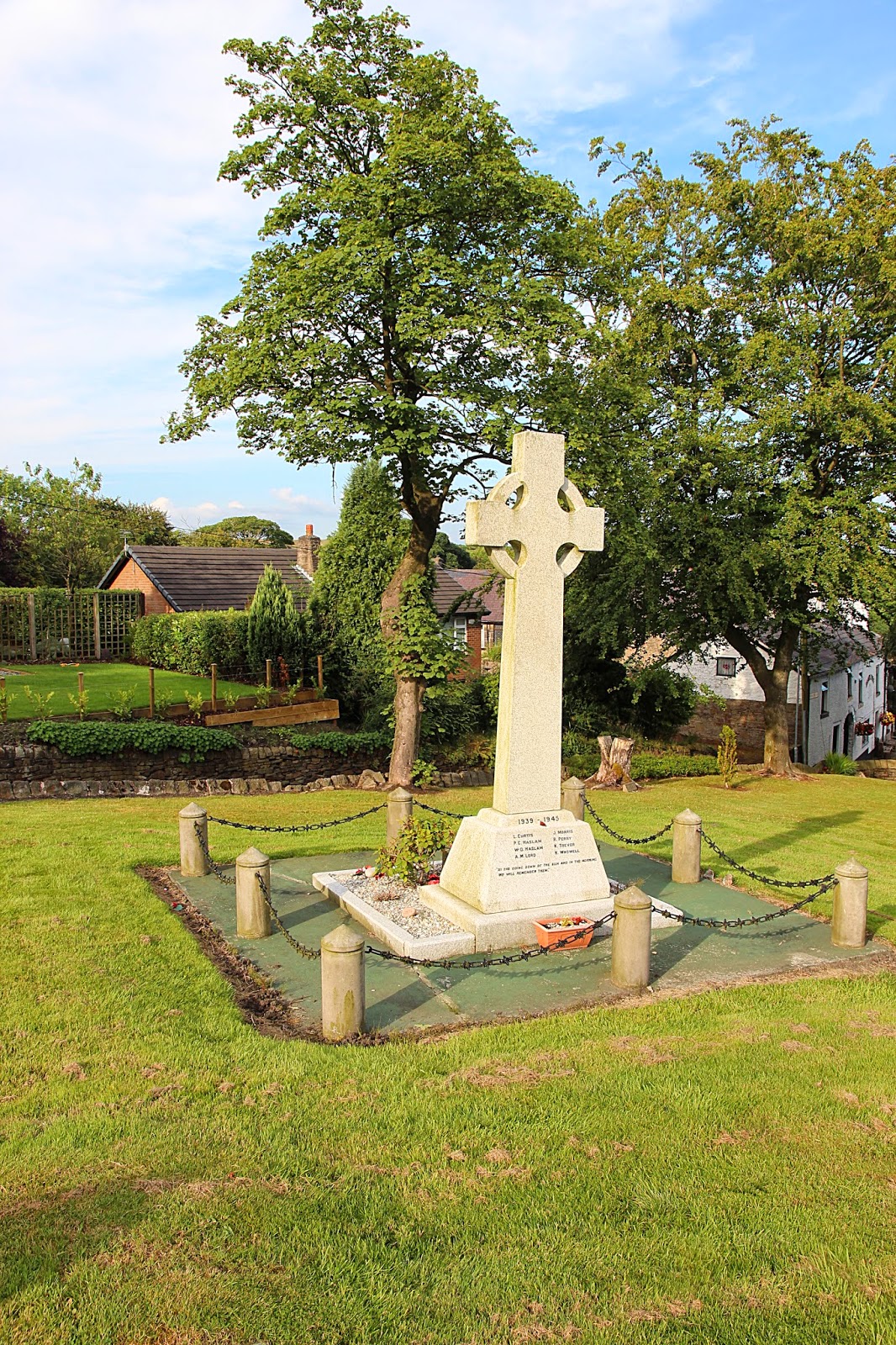 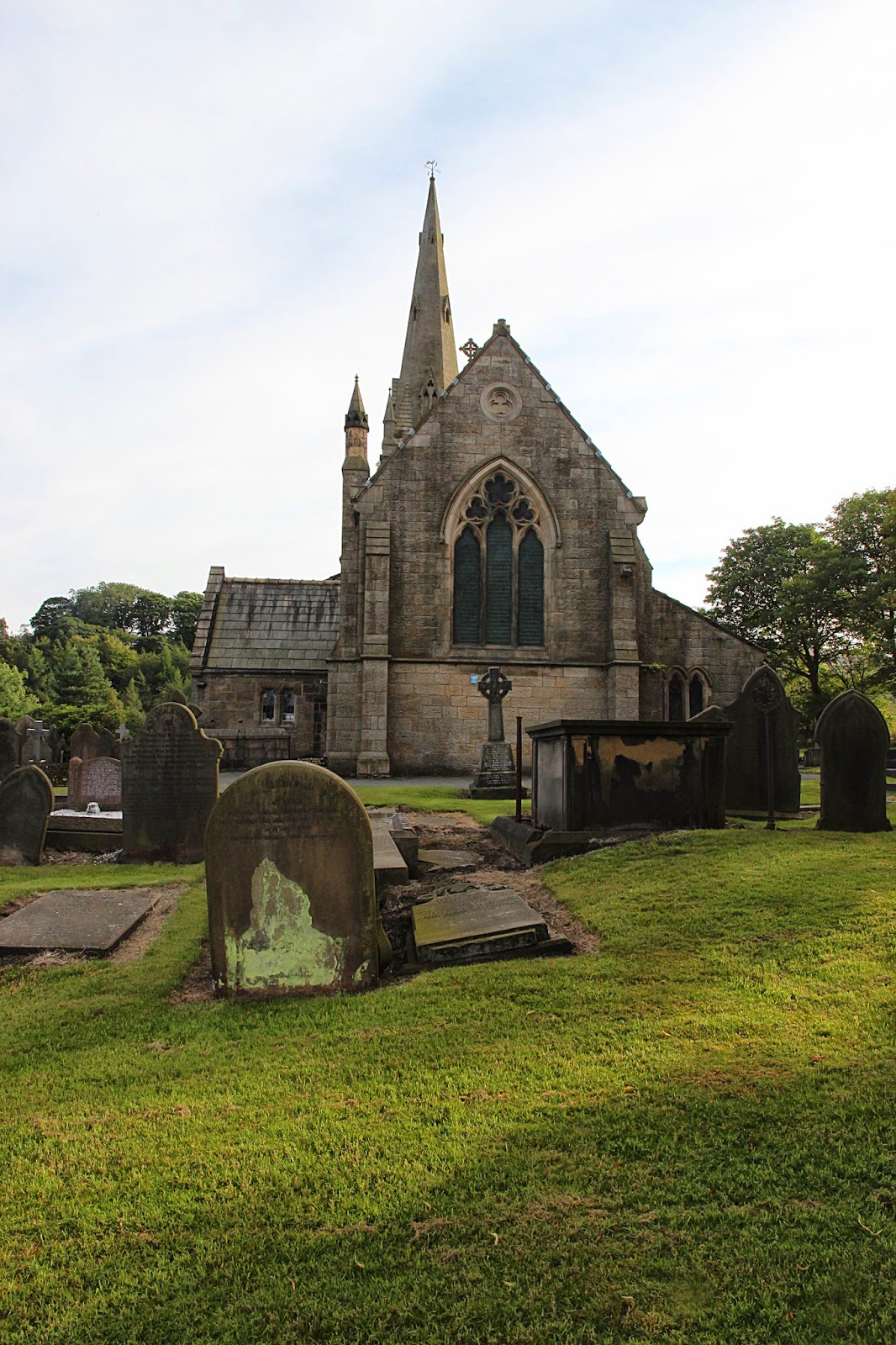 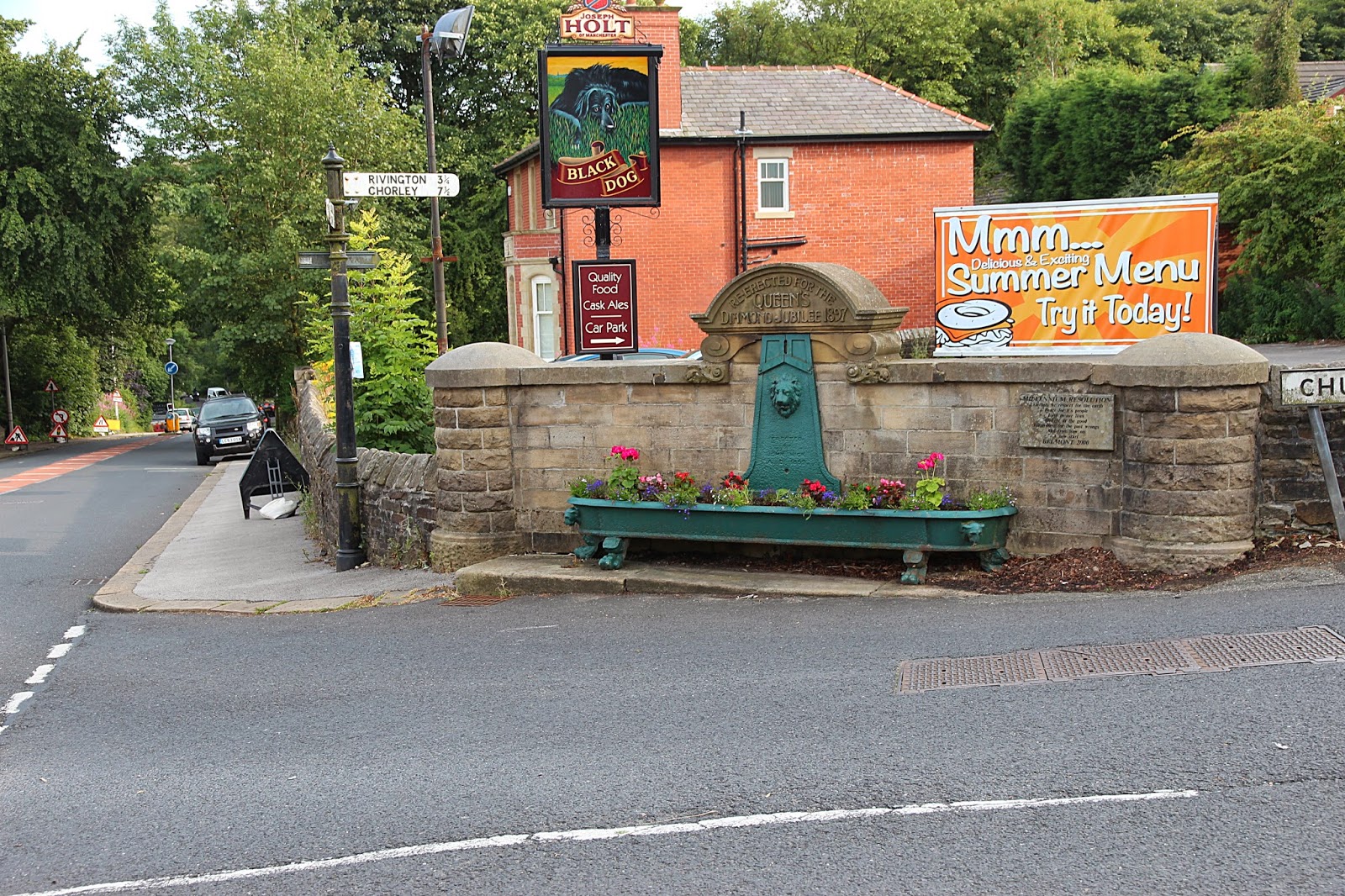 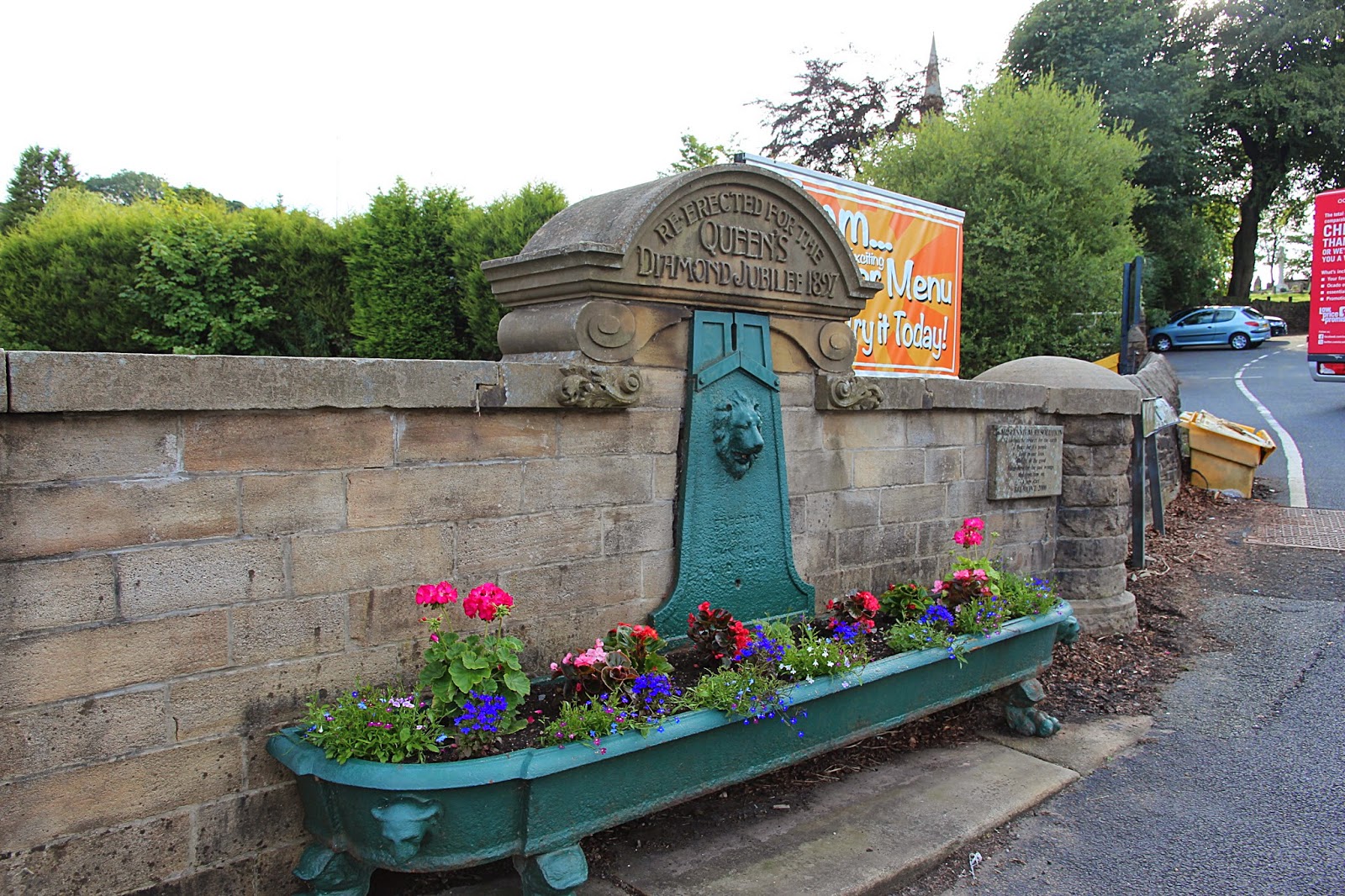 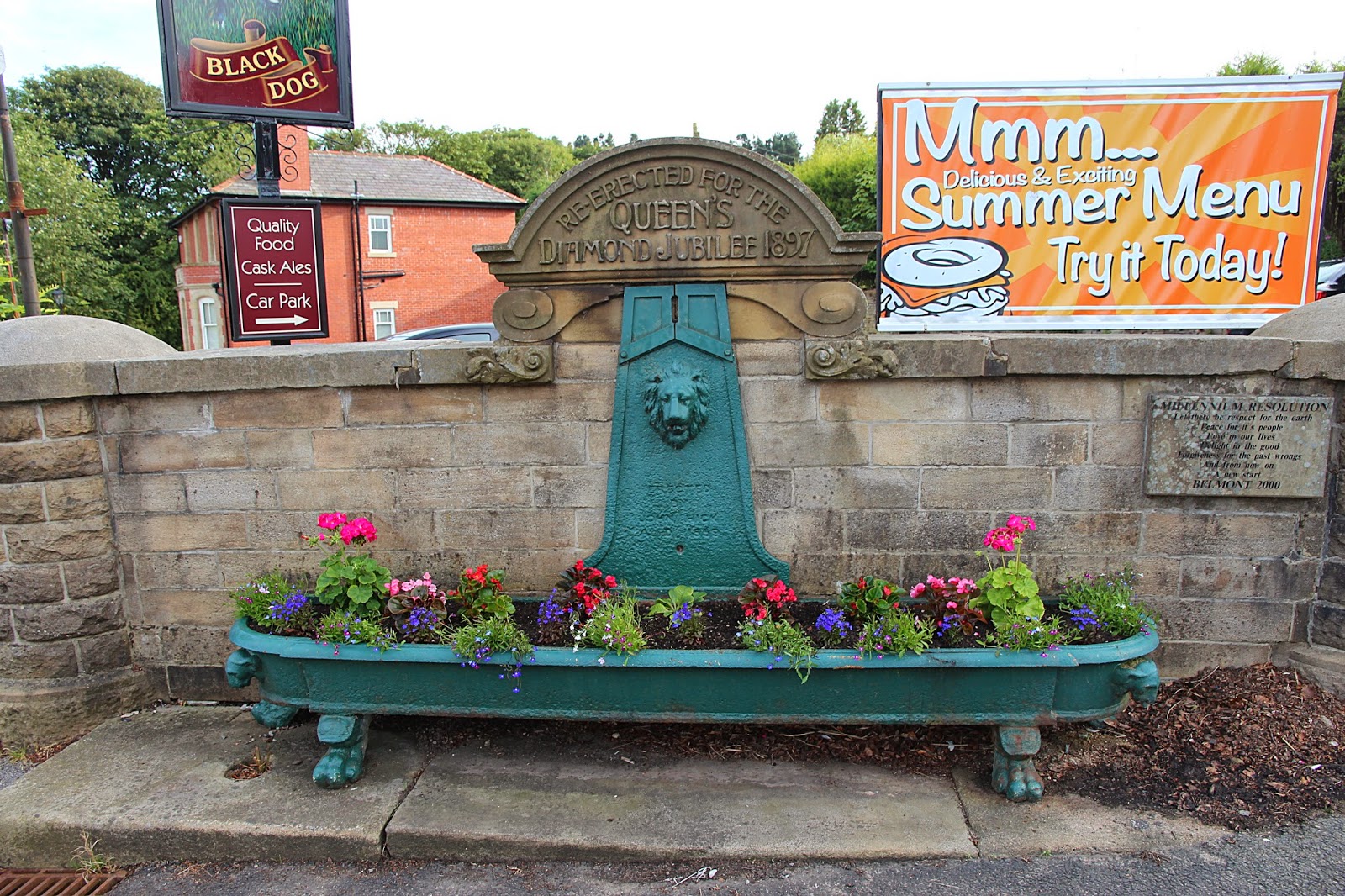 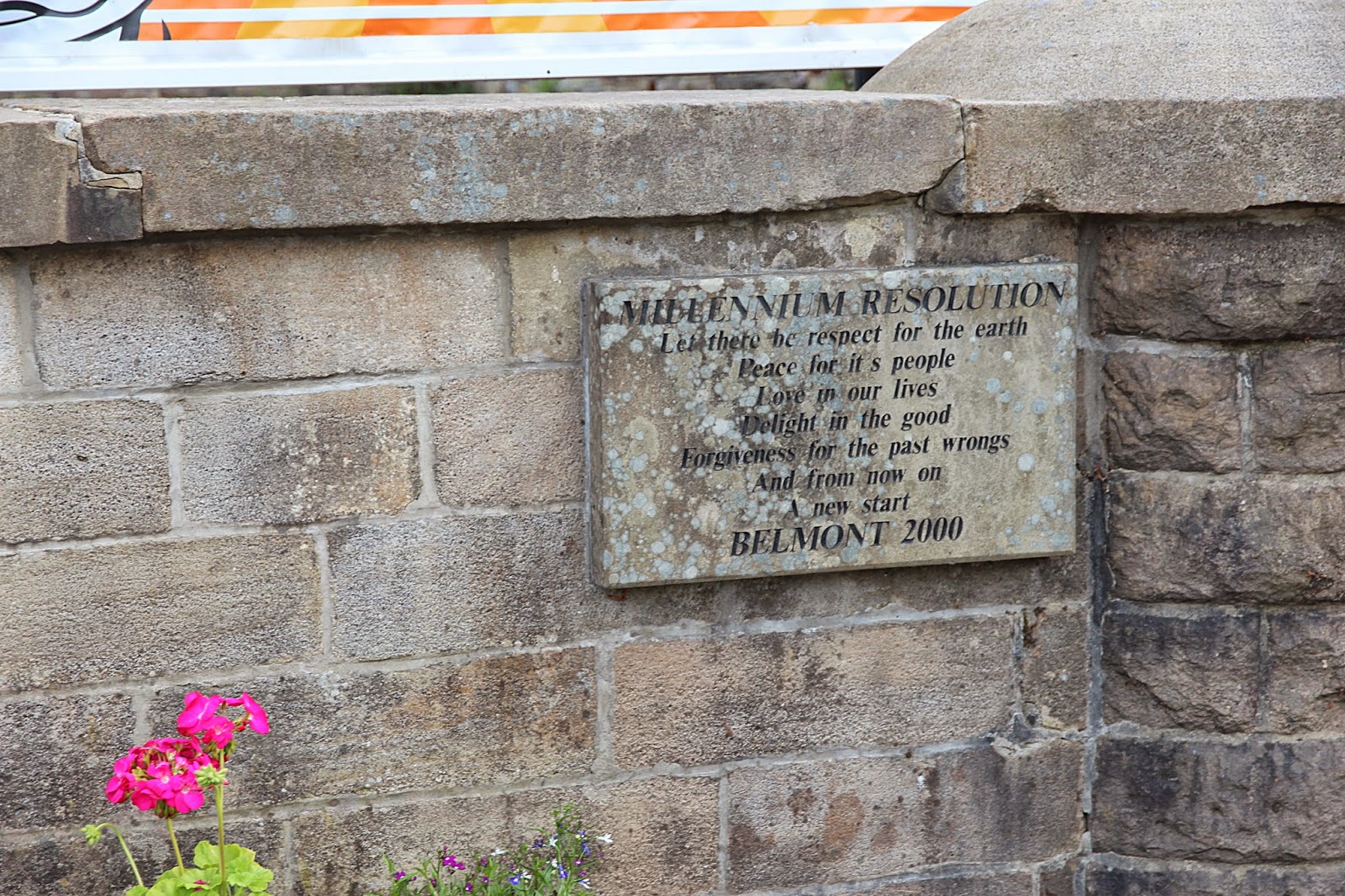 To be updated shortly
Posted by Jol Martyn-Clark at 14:54 2 comments:

Between Tottington and Affteside is Four Lane ends. It sits at the junction of Bradshaw road and Harwood road. Tiny community, just a handful of cottages. I recall forty something years ago driving a Landrover with my Grandma Jane up to these cottages on a Christmas morning, in the snow, to take a Christmas dinner to the old people - Meals on Wheels. Now with a big grip on my family history this church stirs some distant memories. Some of the engraved names are distant relatives or relatives of relatives. The two stone inscriptions are important too. They represent that even a tiny community such as this sent their menfolk to war.

There are two inscriptions to the right of the left window below:

I am not sure that these inscriptions are in the IWM Database. 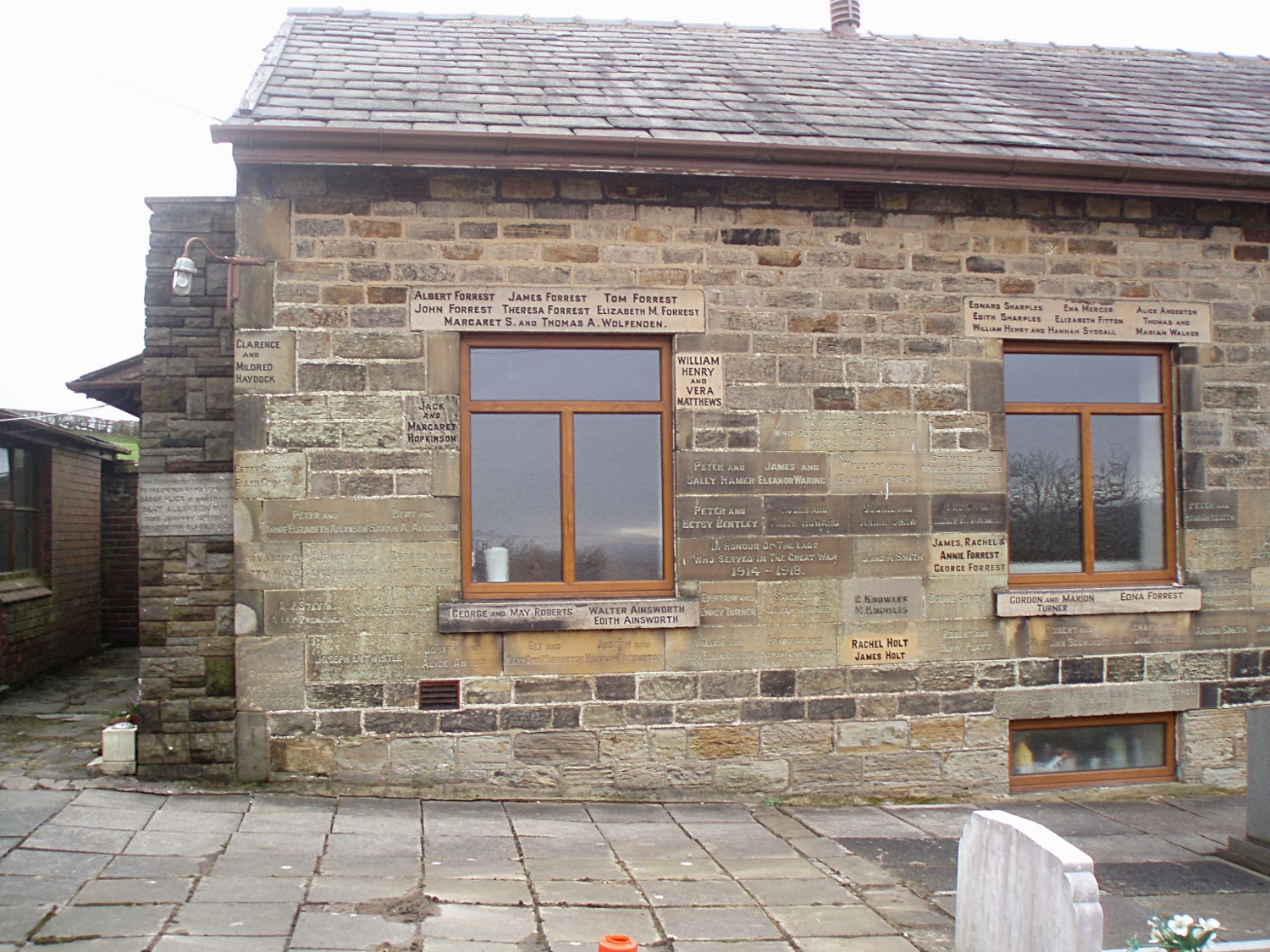 It is clear that the names on the walls are families that used the church, how or why they had their names engraved is not clear


I did not have time to do a proper photo study as I was in the middle of "The Peelers" challenge walk, so I took the chance to take what I could and move on!
The names are transcribed below. - Hopefully your internet search will have found them! 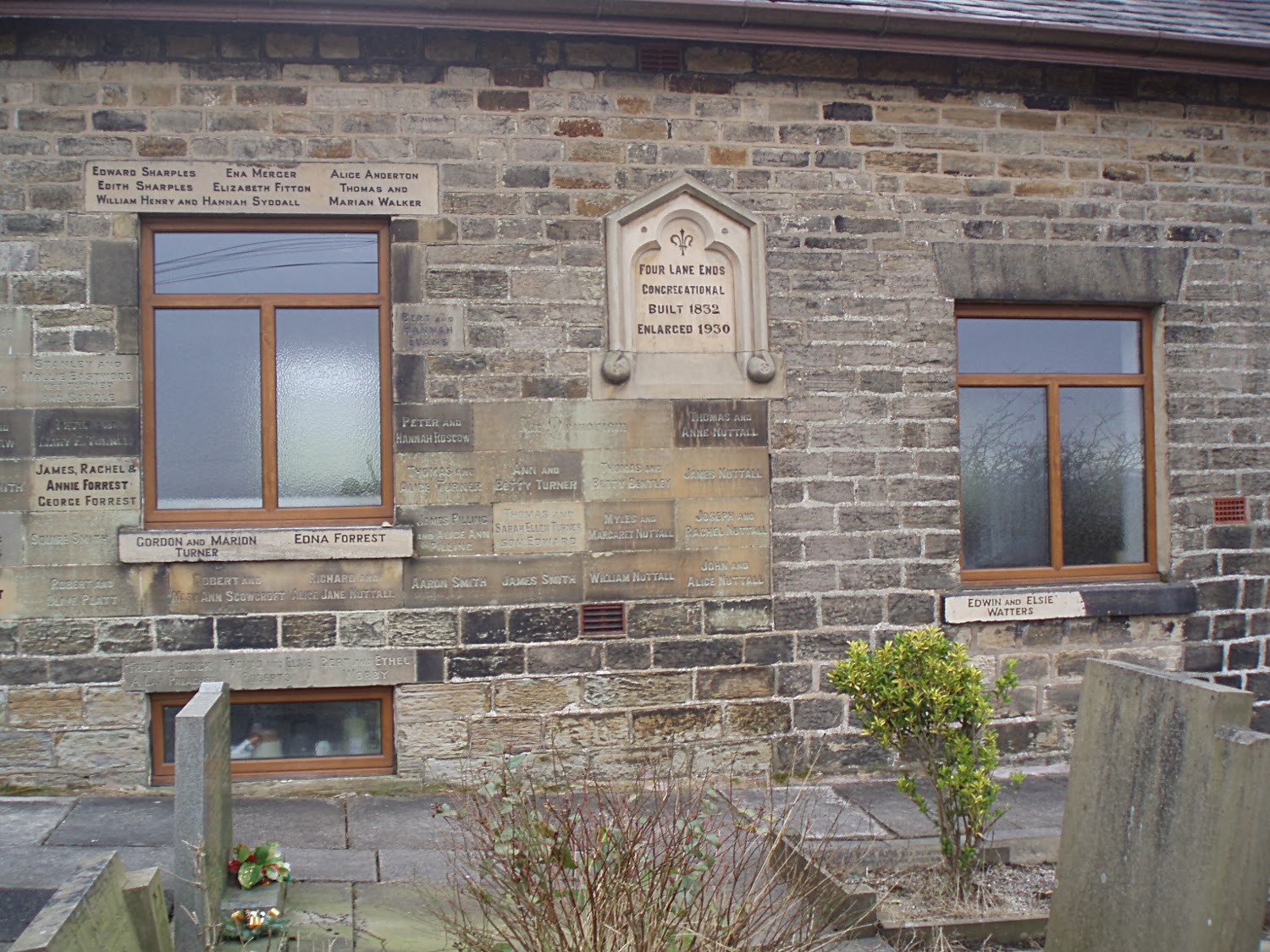 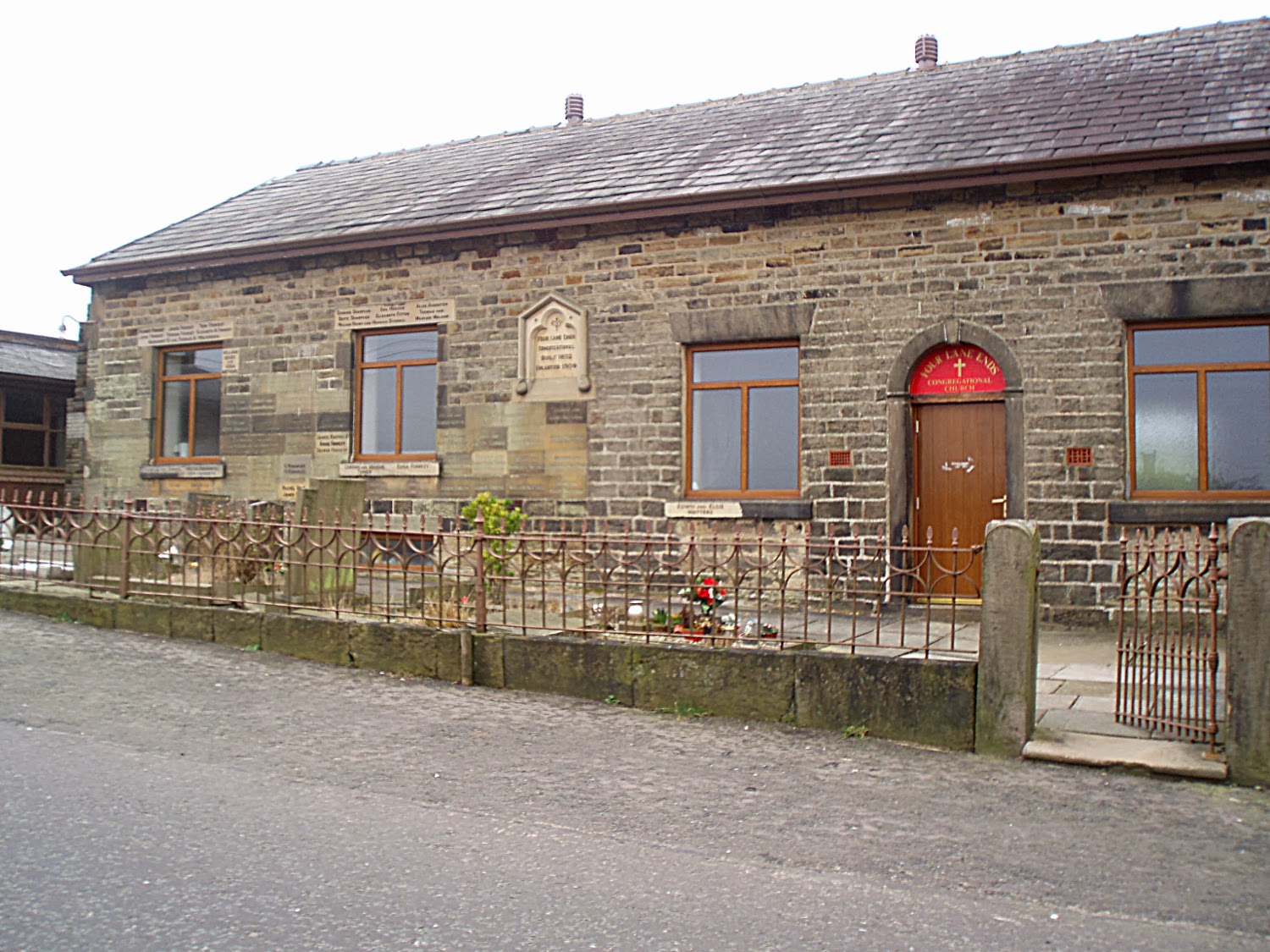 There appears to be Allanson round the corner, but I can't resolve it

There is also a stone that says "In Memorium"  This could mean that these are the parishioners that are remembered that have been engraved on the stones. More research!

Not too happy with this - poor photos

The route of the Anglezarke Amble passes three memorials on its route to the Belmont Road. This little memorial plaque is placed on a gatepost as the road starts to descend from the summit. The Grid Reference is SD 66100 14698

The path continues down to the main road between Belmont and Bolton. I will post the other pictures soon. Suspect that George Henderson will have used this track frequently to travel to Belmont. See below.

This information has been taken from Horwich Town Council Website: Although the photo is mine.
Scotsman's Stump lies just inside the Horwich Boundary, close to the summit of Winter Hill. It marks the spot where a young Scotsman was murdered on 9 November 1838. George Henderson was a 20 year old native of Annan in Dumfrieshire and he worked for a Blackburn draper as a travelling salesman.
He often walked across the moors to settle financial matters with his employer. On the fateful day, an autumnal mist enshrouded the hills as Henderson set out on his last earthly journey.
He called into a local hostelry at around twelve noon for sustenance before embarking on the trek over the hill.
Shortly after he had left the inn, a young boy saw blood on the road and heard somebody desperately crying for help from a ditch.
The boy fetched help, and Henderson was found horribly disfigured by gunshot wounds.
Despite attempts to revive him, George Henderson died at 2.00pm that same day. It is reported that his last words were "I am robbed, I am killed". Much evidence pointed to the identity of the murderer as James Whittle, a 22 year old man who lived close to the inn where Henderson had taken his last sojourn, and who had bought a shotgun the previous day.
So strong was the evidence that Whittle was charged with Henderson's murder and stood trial at Liverpool Crown Court. The main prosecution witness, a Joseph Halliwell of Bolton, became increasingly less reliable as his testimony proceeded, and it took the jury less than an hour and a half to acquit Whittle.
Nobody else was charged with the murder. Shortly after George Henderson's murder, a tree was planted to mark the place of his demise. In 1912, a cast iron pillar was bought by public subscription to replace the tree, and it stands there to this day, Scotsman's Stump, a memorial to the young victim of a murder most foul.

In memory of
George Henderson
Traveller
Native of Annan, Dumfrieshire
Who was barbarously
Murdered on
Rivington Moor
At noonday Nov 9th 1838
In the 20th year
Of his age

A heading in the ‘Bolton Chronicle’ on Saturday, 10 November 1838 stated: Horrible murder at Belmont

George Henderson, a young Scottish packman was employed as a traveller by a Mr John Blackburn. He moved around the neighbourhood taking orders; selling, delivering, and collecting payment. He visited Blackburn regularly to report to his employers.

On Thursday 8 November he stayed at the ‘Old Cock Inn’, Blackrod, a village on the turnpike road, from Manchester to Preston. An old track from Blackrod led down to Anderton Hall, Horwich then across to the Rivington Pike road, near Winter Hill and joining the regular old packhorse route to Blackburn by way of Belmont, a moorland village on the Bolton to Preston road.

Henderson left Blackrod about 8.0 am on the Friday morning but he never arrived in Blackburn. He was found at 13.45 pm lying near the summit of Winter Hill, by the road descending to Belmont. He had been shot through the head and he died at 2.30 pm in a nearby cottage. The motive was presumed to be robbery and as a result of the evidence, a local man James Whittle, was arrested. Following the inquest he was sent for trial - and acquitted, the murder remaining unsolved - at the Lancashire Assizes at Liverpool in 1839. By the T.V. mast on Winter Hill, a memorial known as Scotsman’s Stump was erected, to mark the spot where George Henderson was shot. It bears the following inscription:-

“To the memory of George Henderson, traveller, native of Annan, Dumfries-shire, who was brutally murdered on Rivington Moor at Noonday, November 9th 1838 in the 20th year of his age.

(Extracted from The Manchester Genealogist, Manchester & Lancashire FHS Vol 28 No.3 July 1992 from a talk given by Mr David Holding, author of ‘Murder In The Heather. Published in 1991)

These 2 stories are essentially the same.
Anyone with an interest in Winter Hill should obtain a copy of

By Dave Lane (needs a search on Inet

W. Garbut, beerseller and master collier, said he lived at Five Houses, Horwich. There were no houses on the road but those between Horwich and Belmont. A girl informed him ... He saw Whittle pass by his house while the Scotchman was in.